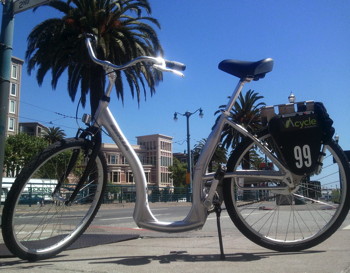 ViaCycle, a new Y Combinator-backed startup, wants to be to bike sharing what Zipcar has become for cars. While there are many cities around the world where bike sharing is a fact of daily life, only a few cities in the U.S. currently offer similar programs and the ones that exist are often expensive to operate. The viaCycle team, which has been working on its platform for three years, uses a very different approach from most of its competitors. Unlike other systems, viaCycle doesn’t need special docking stations for its bikes, for example. The team has developed its own hardware that is integrated into the bikes to lock and unlock them through a phone call, text or via the company’s mobile app. This means viaCycle bikes can be locked to standard bike racks anywhere and the cost of getting started is significantly lower than with similar systems.