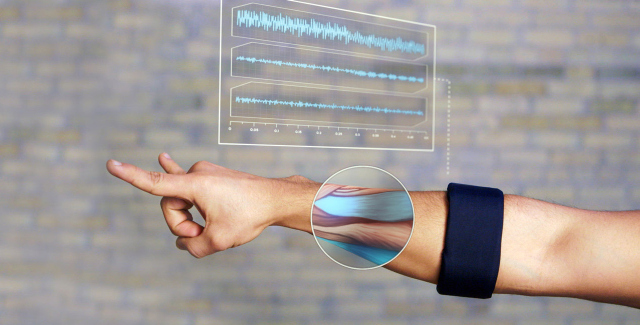 Thalmic Labs, the Waterloo-based startup working on an all new form of user input for computing devices with the MYO amrband, today announced the close of its $14.5 million Series A funding round, led by Spark Capital and Intel Capital. The round boasts a lot of others besides, including Formation 8, First Round Capital, FundersClub, and individual investors like Paul Graham, Garry Tan, Marc Benioff and more, and will be used to help spur product development of the MYO, and of other forthcoming Thalmic technologies.

MYO, for those who aren’t familiar, is an armband that measures electrical activity to detect fine movement from a wearer’s arm, making for sensitive, accurate gesture-based control of computing devices, including desktop computers, smartphones and tablet, as well as a range of other possible devices. Thalmic is co-founded by three graduates of the University of Waterloo’s mechatronics (yes, that’s a real word) engineering program, including Matthew Bailey, Aaron Grant and Stephen Lake. I spoke with Lake about his company’s funding, their plans fo the money and the challenges yet to come for MYO, which is still in the pre-order stage, with a launch intended for late 2013.