SendHub (YC W12) launches Shared Groups for text and voice, the ideal way for teams and businesses to contact each other 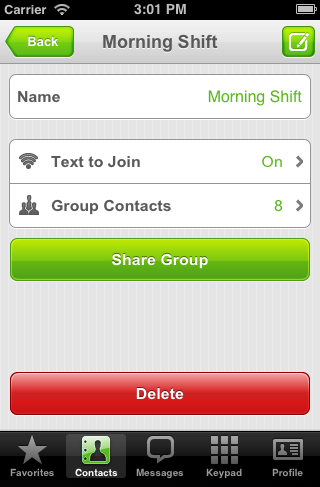 …the team at SendHub is more excited about the new feature they’re debuting today called Shared Groups. For those unfamiliar with this company,SendHub is something of an alternative to Google Voice, but one that was designed with the needs of businesses in mind. The scalable voice and SMS platform, built on top of Twilio technology, allows organizations, including schools, mom-and-pops, and enterprise customers the ability to call and text with their customers.

The company first got its start as a platform for teachers, who needed a secure way to communicate with students and parents, and, to date, it remains a “freemium” service so schools will always be able to afford the system. But for customers who have the specific need of sharing contact information across an organization, the Shared Groups feature will help significantly. Explains SendHub’s co-founder Ash Rust of the addition, “it’s just like a Shared Folder in Dropbox – you make one edit to a contact, and it’s pushed out to everyone else who has access to it.” The recipients can either read or edit the contact group, given the permissions set by the sender.

SendHub has been continuing its rapid growth, and has now sent 5 million messages on its platform, up from 1 million in July. And it’s now sending 2 million messages per month – significantly higher than the 300,000+ the company reported in late June. It has also grown its user base from 5,000 to 25,000 during that same time, including both free and paid users. “Our monthly active number is about 75% of our total – that’s people who have taken an action in the last 30 days,” explains Rust, breaking down the numbers. “And we try to look at conversion over a six-month period. For active users who have been with us for six months or more, that’s where we see conversion at 11%,” he says.