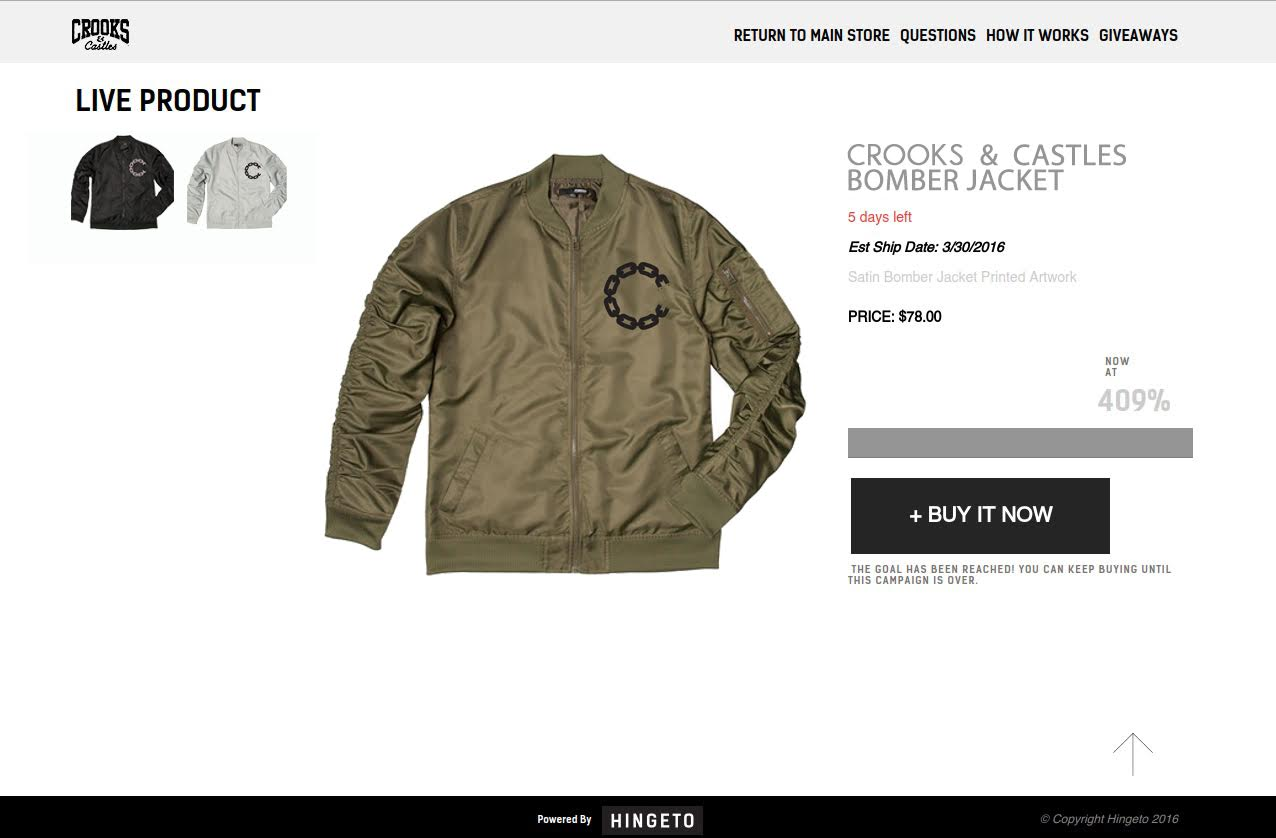 Every year, fashion brands make multi-million
dollar inventory decisions without any customer feedback. This approach leaves them with
tons of unwanted stock.

Fast fashion brands such as Zara have enjoyed surging popularity (and profitability) by making
products based on customer data: They feature styles with limited
inventory to test in their stores, and then produce more of the top sellers within weeks.

Hingeto is a company launching out of our Winter 2016 class that democratizes this approach, giving every brand the tools to test their fashion
ideas before they have to invest in producing them.

Hingeto builds crowdfunding sites that let fashion brands test demand for new designs without having to produce them upfront. Hingeto’s
sites integrate seamlessly into a brand’s own website, and lets them
test dozens of new designs simultaneously, and only produce the
popular ones.

Take the jacket pictured in the feature image above. The bomber jacket was a trending fashion item for this spring —
but youth fashion brand Crooks & Castles didn’t have one in stock, and had no way to know if it was worth the investment to add one to their lineup.
Hingeto enabled them to design a mock-up
and offer it to their customers within a day, without any upfront monetary
commitment. As a result, they’ve sold nearly 100 units in a few weeks at
high margin, generating thousands of dollars in new revenue.

The key difference between Hingeto and
traditional crowdfunding sites like Kickstarter is that traditional
crowdfunding sites focus on one product at a time, but fashion brands
want to to crowdfund dozens of designs at once.  Fashion brands are also
already selling products on their own site, so it doesn’t make sense for
them to send traffic away to a crowdfunding site.  Hingeto plugs into the brand’s own website, creating an extension of their existing experience.

Hingeto
has raised a seed round of funding led by Kapor Capital, early Zappos investor Base Ventures, and Charles Hudson’s Precursor VC.