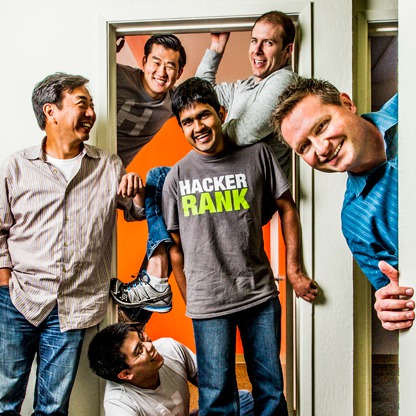 In Silicon Valley Talent War, Zombie Math Rules, appearing in the May 6, 2013 issue of Forbes:

Within Silicon Valley the prince of programming contests is Vivek Ravisankar, a 26-year-old Indian immigrant who cofounded InterviewStreet, which earned interviews for some 5,000 engineers worldwide last year and placed about 500 in jobs. Ravisankar started the company in 2009, soon after quitting a safe corporate job in India helping Amazon.com with its Kindle blogs. In 2011 Ravisankar won a spot in the Y Combinator school for startups (birthplace of Dropbox and Airbnb) . He eventually moved from Chennai to a cousin’s sofa in Sunnyvale, Calif. and set out to build a coding-challenge business.

Powerful people took a liking to this energetic striver. Vinod Khosla, the billionaire venture capitalist and cofounder of Sun Microsystems, provided Ravisankar with $3 million. InterviewStreet collects money in several ways from companies looking to hire. Some pay a $3,000 to $5,000 monthly subscription fee for access to InterviewStreet’s coder database; others buy talent a la carte, paying InterviewStreet $10,000 per hire, a bargain compared to conventional recruiters’ fees of $30,000 or more. Companies can also sponsor their own contests, known as Code?Sprints, which bring marketing cachet as well as new hires.

InterviewStreet has expanded to 17 people, 6 of whom work in a bare-bones office in Mountain View, Calif., with the rest in Bangalore, led by cofounder Hari Karunanidhi, Ravisankar’s college buddy. Competitive coders are their tribe. As a boy Ravisankar won candies and other treats from his parents by posing logic problems that his father couldn’t solve. Even today he and cofounder Karunanidhi set aside a few hours on Sundays for one-on-one coding competitions. “I’m the better programmer,” Karunanidhi says. “It’s only because I don’t have enough time to stay sharp,” Ravisankar replies.

InterviewStreet was the ticket out of Siberia for Yakunin, the programmer from Ekaterinburg. He wowed the hiring engineers at Quora, a knowledge-sharing website in Mountain View, Calif., by being the only person out of more than 700 respondents to win a perfect score on a CodeSprint challenge it sponsored. Often the best coders aren’t eager to apply for a job. They just want to prove their mettle against all comers. Mindful of this dynamic, InterviewStreet moved the bulk of its contests to a website called HackerRank, where most entrants log in with pseudonymous user names. Job hunters authorize the site to reveal their real names to potential employers.