Everyday.me (YC S12) launches the Evernote for your life – a timeline for both your public stream and private journal 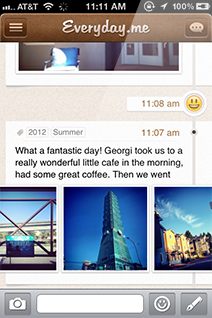 In other words, Everyday.me is a mobile and web-based notebook, with bells and whistles, which allows you to record your life and save those updates indefinitely. It’s a bit like Facebook Timeline were it plugged into all of your social networks and were it tailored to be a personal journal in one timeline.

To that point, an even bigger differentiator and likely a point of appeal for many, is that Everyday.me is a private, personal journal. Users can plug in their Facebook, Instagram and Twitter profiles so that each feed is funneled into the app (with Foursquare, Tumblr next up for integration as well as life-logging apps like Nike+ and Fitbit) and can then tag using Twitter-style hashtags to organize and group posts so they’re easier to digest.