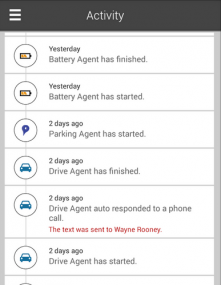 It would be nice if our phones knew to read our text messages aloud when we’re busy driving, or to silence themselves when we’re sleeping, but all too often that kind of stuff doesn’t just work out of the box.

While apps like Google Now — apps that assist users proactively and are contextually aware — are one of the trendiest things in tech, they’re usually either only helpful in theory, or entirely too complicated.

Agent, a new app from Tagstand, aims to be a smart personal assistant that actually helps get things done without requiring tech know-how, extensive configuration, or the powers of imagination to dream up what your phone could automate for you.

Agent costs $1.99, and it’s only available for Android. Compared to alternatives like IFTTT for iOS and Tasker for Android, it is built to have more mainstream appeal.

“What we’re doing is quite complicated and requires a lot of calibration,” said Tagstand co-founder Kulveer Taggar. “But we want you to install it and then not have to think about it.”

Read the full article at AllThingsD