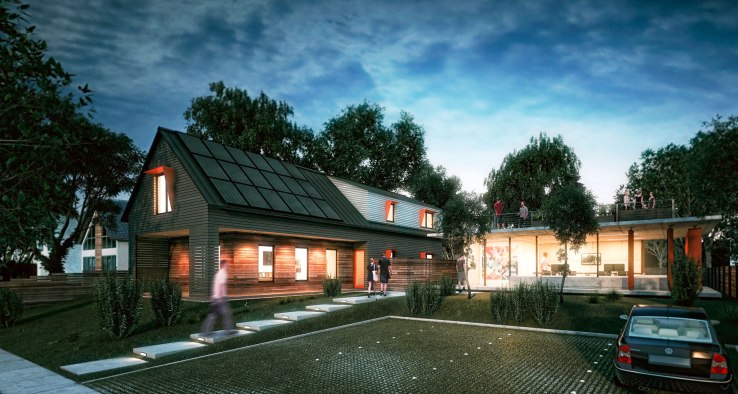 The typical American home built today is fundamentally very similar to homes that were built in the mid-20th century. In aggregate, this adds up to a lot of inefficiency: American homes consume a quarter of the nation’s energy and 14 billion gallons of water annually.

Acre Designs is a company launching out of our current Winter 2016 class that makes it incredibly easy to build a zero-energy smarthome — one that’s functional, beautiful, and reasonably priced. Acre homes are 100 percent solar powered, and use 70 percent less water than your average home.

TechCrunch reporter Frederic Lardinois wrote about Acre in a story published this week:

“As Acre co-founders Jennifer and Andrew Dickson told me, they started
the company out of their own frustration in finding a sustainable home
that was built to modern standards. Specifically, they were looking for a
zero-energy home that could use solar to power the entire house.

‘We realized existing homes were very difficult to get to any
standard of efficiency without a lot of work,’ Jennifer told me. ‘But we
are still building new homes with the same standards as 60 years ago.’

Andrew (an industrial designer with experience in working on everything
from furniture to jet boats) and Jennifer (an architect) co-founded the
company with builder Don Newman (now Acre’s VP of Construction) and got
accepted into Y Combinator. …Given how outdated the construction process and many of the designs and
features of today’s new construction homes often are, it’s a bit of a
surprise that nobody has really tackled this market yet.”

Read the full story, and see more photos and a video of an Acre home, here.