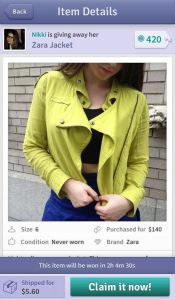 99dresses, the Y Combinator graduate that gives women the ability to hit “refresh” on their wardrobes as often as they like through clothing swaps, has gone mobile-only with the launch of its new iOS app. The startup has fundamentally reworked the virtual currency system on which its swaps operate, due to the fact that U.S. users didn’t take to it the same way that the startup’s original Australian user base had.

99dresses recreates clothing swap parties in a digital format — the main point is to unload pieces you don’t like any more with the possibility of picking up a cute new piece for free.

When 99dresses launched, it was based on a “button” economy in which users received buttons in exchange for each piece they sold to another user, which could then be used to purchase another item. The site sold additional buttons for $1 a pop, in case someone wanted to go for a bigger buy.

But while that system worked well in 99dresses’ native Australia, it didn’t work so well when operations moved to the U.S., founder Nikki Durkin explained. The startup no longer operates in Australia.

“We wanted something in America that was more about instant gratification,” Durkin said.